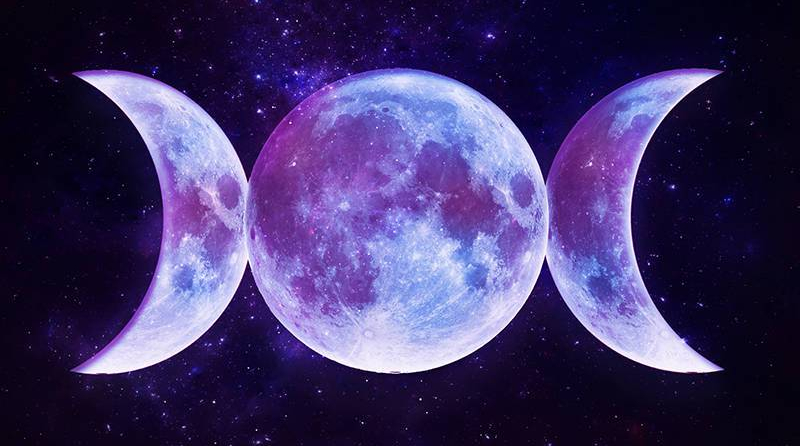 When one starts studying astrology, it quickly becomes obvious, that everything is linked to everything else and there is a neat and rounded system to this knowledge. Many of the objects and characteristics are organized or grouped by two (concept of polarity) or three (concept of triplicity).

Polarity embodies the principles of masculine and feminine, light and dark, Sun and Moon and so on. Division by four, as we can see in the elements (fire, water, air, earth) or directions (South, North, East, West) are just double polarities.

Triplicity is based on the three stages of development and is closely connected with… no, not the Christian trinity, but with a much older divinity – the triple Goddess of pagan times – the Maiden, the Mother and the Crone. This also finds its reflection in astrology, most obviously in modalities (cardinal-mutable-fixed) and house types, but also less obviously in other places. If we take the planets of the septener (the 7 visible ones) and leave Mercury to itself, as this planet is hermaphrodite, we have 2 triplicities of male and female. Mars, Sun and Jupiter correspond to Young boy-Father-Old man stages, while Venus, Moon and Saturn show us the Maiden, the Mother and the Crone. 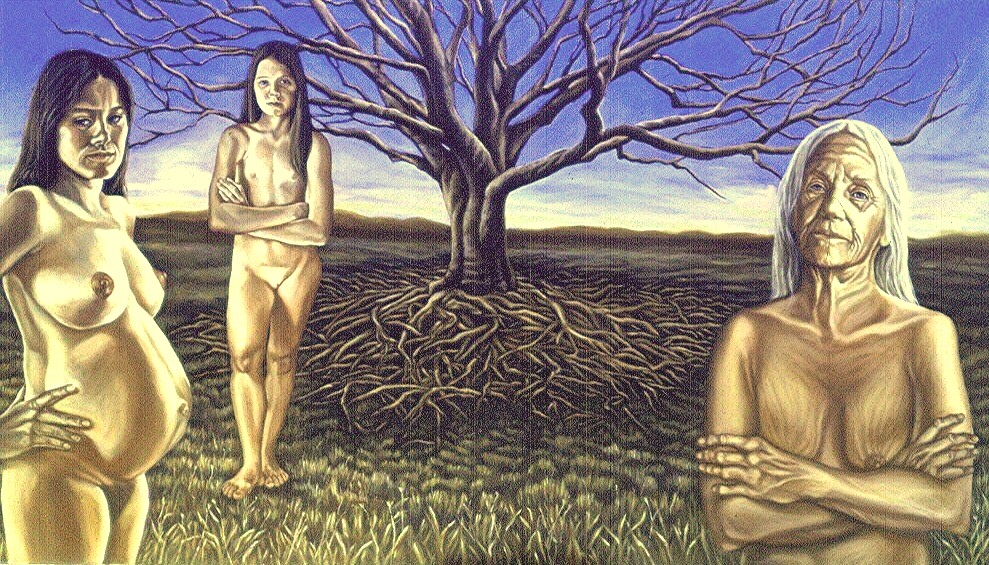 The Moon can also represent all three stages completely by itself with the 28-day cycle of waxing and waning (with the new Moon being  “death and re-birth”), so it is no wonder in both Eastern and Western traditions this celestial body is of great importance. Well, also perhaps because it is physically the closest object to the Earth and even people not related to the study of natal charts know it affects us (e.g. the tides).

The Moon represents our subconscious, our emotions, but is also connected with the body. It is truly multi-functional and quite unique in the way it shows both the soul and the vessel for it. In addition,  its orbit also gives us a few extra points in the chart to play with – the North and the South Nodes (again – notice the polarity) and Lilith, the Black Moon… wait, but where is it’s antipode? You might have heard about it, but sadly Black Moon and information about her dominates over the astrological world the same way gasoline cars dominate over electrical ones in the current market. If you’re looking for information on Lilith – it is abundant. Controversial, but abundant. All major online chart calculating software includes her by default. There is no sign of White Moon anywhere but astro.com and even there you get the choice of three Liliths (four, if you count Waldemath Black Moon, a hypothetical object) and only one White Moon (two if counting a hypothetical object Selena).

Why so many? I’ll try not to bore you with a long scientific explanation. Basically, Black Moon is the furthest point from the Earth on the Moon’s orbit (Lunar Apogee), regardless, of where the Moon is at any point in time. By analogy, White Moon SHOULD be the closest point of this orbit (Lunar Perigee), and not some imaginary point with easily calculated ephemerides(table of positions). With all due respect to the astrologers who came up with it and calculated its path – it is bad enough that apogee and perigee are fictitious points in the chart (they don’t have a physical representation in the sky), so we don’t need to add more imaginary things to this mess.

That leaves us only with points that are actually on the Moon’s trajectory. Still we have two of each, which in my humble opinion is two too many. The reason for such variety of choice is that the Moon’s orbit is highly affected by the gravitational pull of the Sun which results in great monthly oscillations. In other words, the Moon’s orbit wobbles and causes difficulties in calculation, so mean value was introduced. I understand the need for it at the time when the charts were drawn by hand and the software was available to very few people and was not as precise as it is now. However, nowadays we have the technology to calculate the exact position in seconds, so I feel that the mean value for both of these points, as well as the Nodes, is becoming redundant. It reminds me of an old joke where a nurse is reporting to the doctor at the beginning of his shift about the stats in the hospital: “The average body temperature is 36.6℃ (98℉), including the mortuary!”. To give another example here – my brother has two kids and I have none. On average, we have one child each, but in reality the amount of diapers I have changed in my entire life equals zero, while my brother had changed a large number of them.

Thus, the average (mean) value of the focal points on the Moon’s orbit is not likely to reflect the real state of things. And that leaves us with only two ladies – the True Black Moon (Lilith) and the True White Moon (Selena). It is worth noting that in Avestan School of Astrology these points are called Arta and Druj – terms from Zoroastrian theology, which help to investigate exactly what these points reflect in the chart. I don’t want to confuse you by introducing new names, just know that those are the points I use in my work and if you use ZET software you’ll find them in the settings under those names. For now I’ll keep referring to them by their more familiar names taken from Jewish and Greek mythology.

It is a common belief that Lilith is bad influence, the tempting demon, while Selena is our guardian angel and shows all things good.  Similarly to Saturn being viewed as a great malefic and Jupiter as a great benefactor by the majority of astrology enthusiasts out there. Sure enough, Saturn transits bring plenty of difficulties just as Lilith transits can bring devastating experiences (especially when combined with slower planets activating our chart). This “badness” is very subjective and is perceived through the lens of our ego. We don’t like to struggle, to feel bad, to work hard and to lose things. Few of us appreciate these difficulties for the contrast they create and knowledge and experience they give us. How can you know what happiness is, if you haven’t been miserable? And how would the light exist without the darkness to contrast it?

Saturn is considered bad because it brings limitations and delays, while Jupiter makes things happen easily. Saturn is the driving instructor that fails you for any minor violation times and again, until your knowledge is solid. Jupiter is the examiner who gives you a pass just because you showed up and because he’s in a jovial mood today. Which driver would you feel safer with – the one tested by Saturn or Jupiter?

There is no doubt that Black Moon shows the point of great sensitivity in our charts. Most seem to think that it shows an accumulated “bad karma” in past incarnations, something that we have to atone. In addition, they say that in accordance with mythology of the name given to it – Lilith – it is our own individual demon that tempts us, provokes more bad deeds and actions and should be resisted. Some argue that this point is an indication of a great creative potential hidden within our deepest and darkest fears and desires. I think the truth lies somewhere in the middle, partially containing some of the ideas above.

The White Moon has much less debate about its nature, all of them positive of course, the difference from author to author is in the shades of her meanings. Guardian angel, accumulation of positive karma (good deeds from past life), a point of integration (in opposition to Lilith’s point of separation) – you get the gist. I personally prefer the view of Selena as the area in which we are masters of balance. Mind you that a balance is rarely achieved by doing only good and right, just like a physical balance of the scales requires some fluctuation at first. This should make Black Moon our point of imbalance or weakness we can try and master.

Let’s remember our Triple Goddess pattern and think how these three points of the lunar orbit – the apogee, the perigee and the physical placement of the Moon – could correlate with the three symbols. Physical Moon is in the middle position, just as our physical body is here and now. It is, in a way, a mother to our soul, or at least that part of our soul that it contains. We can either nurture the child/soul, ignore or mistreat it, just like many mothers do and did in the long history of motherhood. This stage of the soul development has a dual nature to it, which is hard to wrap your brains around at first. The soul/child gets the body/mother (physical Moon) to complete a certain stage in its growth, also shown by the physical Moon. But then again, what isn’t dual in astrology? Depending on what type of chart you’re reading, Moon can show a mother/motherhood or a very young person(child). 4th house (house of the Moon) is your home and childhood but at the same time is the house showing the end of your life.

If you’re brain is boiling now, take a break and come back whenever you’re ready – the article will still be here. If you’re already used to this multi-layered and multi-faceted astrological approach, let’s talk about the other two – the Maiden and the Crone.

Since the Maiden is associated with purity, chastity and innocence, while the Crone is an old crazy hag in the eyes of many, I’m guessing majority would say White Moon is the Maiden, while Lilith is the Crone. Hence the view of Lilith as a great power within us as the Crone, while old and ugly, is also wise due to her age and experience. Nevertheless, you should remember, that if Black Moon is weak and prone to temptation, she is just like a young and inexperienced girl, who is yet to make some mistakes, which she will hopefully learn from.

White Moon doesn’t have to deal with temptation, not because she had learned to resist, but because she’s at the stage where it is no longer a temptation for her. She’s on a completely different level – wise, balanced and whole. She’d been there and done that, she had made mistakes, been deluded and tempted  (Lilith) and through continuous process of growth and experience (physical Moon) she learned to separate the wheat from the chaff. She knows the truth, which Black Moon is searching for. Incidentally, the Avestan name for the True (osculating) Lunar Perigee that I mentioned above is Arta, which is translated as “true statement”. This is the kind of truth you get by empirical knowledge. Something you KNOW to be the truth.

This goes to contrast something I BELIEVE to be the truth, e.g. if someone else convinces me of something that is false, but I sincerely believe and trust that person, I will repeat the false statement with zero intent of lying. According to general karma theory, if I have no bad intent and in my understanding of things, I am not doing a bad deed, then it shouldn’t be bad karma. I could be a 16th century scholar stating that Sun goes around the Earth and condemning Copernicus for his theory. It doesn’t make me a despicable person. It just shows my Black Moon stage of development. It is, just like any other stage, necessary. After all, if you want growth, you need to have room for it.